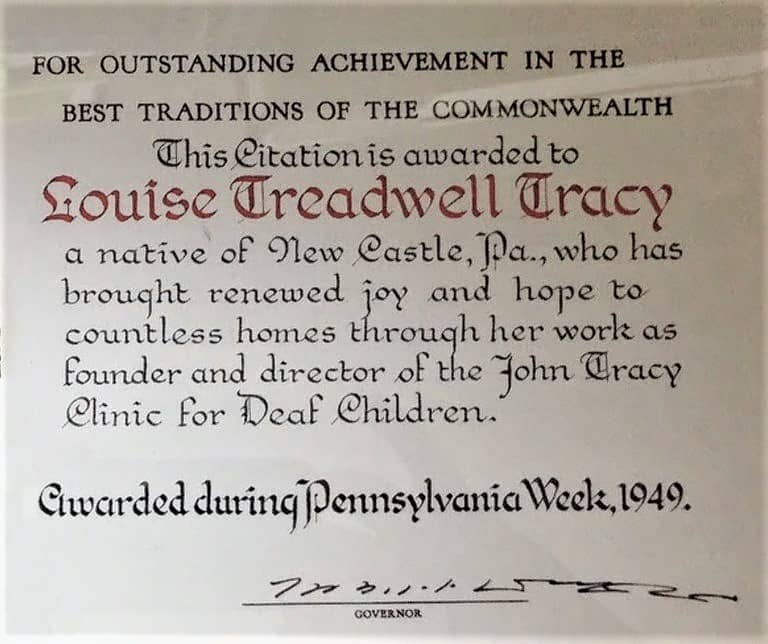 Lawrence County has had a hand in helping probably hundreds of thousands of deaf children worldwide, through the efforts of one single county resident – Louise Treadwell Tracy. Treadwell was the daughter of A. W. Treadwell, attorney and part owner of the New Castle News (New Castle, Pennsylvania).

Louise graduated from New Castle and attended college at Erie. During her summers she was a reporter for the New Castle News. She also taught at Mahoning School. Ms. Treadwell left New Castle to make her stage debut as an actress. A woman of unlimited talents, she was also a choreographer and writer, making contributions to some of the best-known magazines and newspapers, such as the New York Times.

While on a train heading for an acting engagement, she met a fellow actor, Spencer B. Tracy, and it was instant romance. They married in Cincinnati, Ohio, in September 1923, only a few weeks later. Louise gave birth to her son, John, in June 1924, and ten months later discovered he was deaf.

Louise Treadwell Tracy would give up her career and devote her efforts to learn how to teach her son, instead of institutionalizing him, as was a common practice at the time. She taught him how to lip read and learned sign language in order to teach him. John thrived! He attended community college, and the Chothard (Chouinard) Art Institute, later working at Disney Studios.

John’s mother Louise, seeing the lack of educational facilities to help deaf children and their families, established the John Tracy Clinic for the Deaf in 1942. Servicing infants to preschoolers, it was the only such clinic WORLDWIDE.