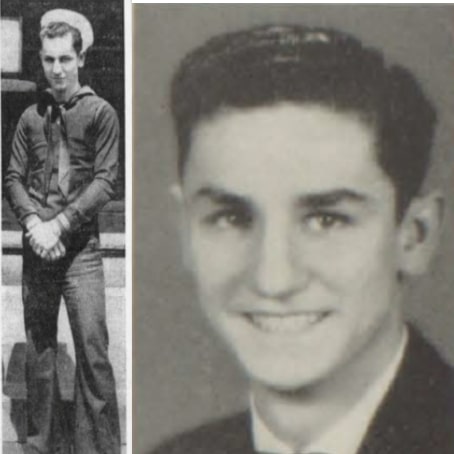 Wilton Loyal “Bud” Taylor graduated from Ne-Ca-Hi (New Castle, PA) in January 1939. A star athlete, he played basketball, football and tennis. On July 31, 1939, Bud joined the Navy for a six-year enlistment. After training he served aboard the USS Texas (BB-35) and then the USS Wyoming (BB-32).

In February 1940 he was assigned to the USS Reuben James, a four-funnel Clemson class destroyer. At the beginning of the war in Europe in September 1939, the ship was assigned to Neutrality Patrol, guarding the Atlantic and Caribbean approaches to the American coast.

In March 1941, the USS Reuben James became part of a force to escort convoys sailing to Great Britain. This force escorted convoys as far as Iceland, after which the convoys became the responsibility of British escorts.

Bud telegraphed his mom on October 23, 1941 from Portland, Maine telling her he was leaving for his fourth trip to Iceland since May, 1941. On that day, the USS Reuben James sailed with four other destroyers escorting a convoy. Bud spent the evening before he sailed with Corporal Joseph Paluszak also of New Castle, whom he had met in Maine.

At dawn on October 31, the USS Reuben James was torpedoed near Iceland by a German submarine U boat, the U-552.

The James had positioned itself between an ammunition ship in the convoy, and the known position of a group of German submarines poised to attack the convoy. The Reuben James was hit forward by a torpedo meant for a merchant ship and her bow was blown off when a magazine exploded. The ship floated for five minutes or so before sinking.

The Reuben James had a crew of 136 enlisted and seven officers. Only 44 enlisted survived. All of the officers were killed.

On November 4th, Bud’s mom and Fred’s wife received two very different letters from C. W. Nimitz, Chief of the Navy’s Bureau of Navigation. One notified Mrs. Zapasnik that her husband had been rescued and was uninjured. Mrs. Taylor, however, received the devastating news that her son lost his life in the line of duty.

Fireman First Class Wilton L. Taylor was Awarded a Purple Heart. His name appears on a memorial on Missing in Action or Buried at Sea Tablets of the Missing at Cambridge American Cemetery, Cambridge England, as well as on our courthouse memorial.

The USS Reuben James was the first Navy warship lost in World War II. Most of the country ignored the sinking at the time, that occurred only weeks before Pearl Harbor.

One who did not ignore the loss, was folk singer Woody Guthrie, who wrote his now famous song immediately after the incident:

Listen to the song here: