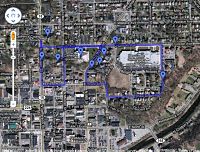 A two and one-half story square plan, patterned masonry Queen Anne residence has many fine architectural features – a three story tower with conical roof in the east bay, a two story bay window with conical roof at the west side and brick cladding with decorative rough cut stonecourses, quoins and window surrounds. It also has distinctive red tile rooting and tall interior chimneys with patterned masonry.

The residence was built in 1895 for Mathias Holstein Henderson (1845-1908) a prominent New Castle resident who served as the vice-president of the Lawrence Savings and Trust Bank (now National City). Mrs. Henderson was the daughter of John Bower, a local tailor whose home is also on the tour. The home is lovingly maintained by the Meehan family.

This two story, ell plan residence showing Colonial Revival influence has wood frame construction with clapboard siding. It has interior end brick chimneys and modillions under the eaves. The north side is bowed. The bay window to the south has paired curved top with one over one double hung windows. The porch has paired Doric columns, modillion cornice and spindle balustrade.

This is another of the homes built for William Reis of Reis, Brown and Burger, one of the leading iron and steel manufacturers in New Castle. Reis was president of Shenango Valley Steel, Crawford Iron and Steel, and National Steel, all assumed by Andrew Carnegie and later U. S. Steel. This was the home of the James Ward Reis family, son of William. The house remained in the Reis family until the death of James Reis’ daughter, Elizabeth in 1993. It was later owned by Larry and Debbie Baron but the home no longer exists. It was razed for the “new” New Castle High School building.

The house was built in 1899 for Edwin Newton Ohl (1850-1922). At that time he served as the manager of the New Castle office of Republic Iron and Steel. He later became president of United Iron and Steel (1906), president of New Castle Portland Cement Company (1908) and a director of the First National Bank. Mrs. Ohl was a daughter of John Bower. It was also once the home of Alexander Crawford and June Hoyt.

This three story, rectangular plan Colonial Revival residence has a rock faced coursed limestone foundation. It is of wood frame construction with clapboard siding. It has two interior brick chimneys and one exterior end brick chimney with corbelled caps. It has exposed braces under wide eaves, a dentiled cornice line between the second and third floors. The bay bowed entry has an elaborate classical architrave with wood door with decorative leaded glass, sidelights and transom. It has a full front porch with clustered and fluted Ionic columns on limestone piers, with a short open balustrade.

The residence was built in 1904-1905 for George and Alice Greer. Mr. Greer was founder of the tin mill industry in the county. The home was designed by Frank Foulke. It was lived in by the Greers until their death in 1926 then it became the home of their daughter, Amanda Greer Love and her family. The Loves lived in the house until 1965. After their death, it was purchased by Joseph A. Clavelli. In 1982, the Clavelli family donated the home to the Lawrence County Historical Society. It is now open Tuesdays, Thursdays, and Saturdays as a museum.

It is difficult to describe the cathedral in a few paragraphs. It is a Neoclassical rectangular plan multi-purpose lodge hall. It is 245 feet wide, 181 feet deep and 110 feet high in the rear. East and west wings each 47 feet by 181 feet. It is running bond brick cladding over “fireproof’ (concrete) construction. The foundations consist of 916 concrete piles, 20 to 28 feet long. The main façade (north) is two stories and nine bays wide. It has two-light windows in freize, the architrave with “Scottish Rite Cathedral” and monumental engaged stone Ionic columns. The South façade is high, visible and a major visual resource. Note the perfect positioning of the building on the crest of the hill.

The interior contains a ballroom, banquet room and theater, as well as Masons’ lodge rooms and various smaller chambers. The theater consisting of the main floor and two balconies has a 3,240 seating capacity . The stage is 80 feet wide and 45 feet 6 inches deep. The grand organ was donated by George and Charles Greer whose original interest in music carried on through the years.

The Scottish Rite Cathedral was constructed in 1924-1925 for the Free Masons Lodge #433 and dedicated in 1927. It was designed by R. G. Schmid Co. of Chicago; the S. M. Siesel Company of Milwaukee and Pittsburgh was the building contractor. Paul Mueller of New Castle, landscaped the grounds. Construction investments totaled approximately $1,750,000. It was the largest auditorium between Pittsburgh and New York. In 2008 the cathedral was placed on the National Register of Historic Places.

The home was built for George W. Johnson (1847-1919) in 1901. Johnson was a leading local industrialist involved in limestone, iron and bronze production. He was principal owner of the American Car and Ship Hardware Company, which he later purchased and renamed Johnson Bronze. The home was designed by local architect Harry W. Wirsing. It is now the home of the law offices of Angelo Papa.

This two and one-half story, square plan Second Empire residence has common bond brick walls and mansard roof. It has central, double decorative wood panel doors with transom. Note the Italianate style brackets. The porch wraps to the East side, with paired posts with decorative brackets.

The residence was built prior to 1886 for industrialist William Patterson (1824-1905). Patterson was instrumental in developing the area’s coal fields and was the leading organizer of the Aetna Iron Company in 1868. In partnership with A. L. Crawford, he founded the Crawford Iron and Steel Company. He also founded the New Castle Nail Company which was later assumed by Shenango Iron Works and then U. S. Steel. He organized the Beaver Valley Railroad and the Pennsylvania Engineering Works. In addition to his industrial activities, Patterson established the Patterson Bank and was instrumental in founding New Castle’s first hospital, The Shenango Valley (located on N. Beaver Street). It was recently purchased by the law firm, Luxenberg, Garbett, Kelly & Sapienza.

The charming two and one-half story rectangular plan frame Queen Anne at the corner of Stewart Place and Highland Avenue has a coursed limestone foundation, hip roof with lower cross gables, and exterior end brick chimney with decorative panels. A turret is located in the south bay with a conical slate roof and a small elaborate spindle balcony in the North Bay. There is a veranda with spindle work, open balustrade and frieze.

This residence was built for industrialist William Reis. Many members of the Reis family lived in the house including politician William M. Brown (1850-1915). Brown served as Special Agent of the U. S. Land Office Department, as Pennsylvania Senator from the 47th district, and in 1902, he was elected Lt. Governor of the Commonwealth. File house also became the home of Louis T. and Rosena Reis Kurtz during their brief marriage. It later became the home of the W. H. Shipler family of Pennsylvania Engineering. It is now being used as a half-way house.

This two and one-half story, square plan Colonial Revival residence has a raised, coursed stone foundation, running bond Roman brick walls, hip roof and tall interior chimneys. There is a tower located at the west bay and decorative quoins at the corners. It also has a Paladin type roof dormer, central decorative leaded glass at second floor and central wood and glass door with leaded sidelights on the first floor. The porch has paired columns and open balustrade with a porte cochere to the west side.

This large residence was built in 1903 for Edward and Mary Elizabeth Patterson King. Mr. King was at one time president of the Pennsylvania Engineering Works. He also served as president of the First National Bank (First Western). His wife was the daughter of Pennsylvania Engineering founder, William Patterson. This lovely home and carriage house has been restored by Tom George & Associates and is now an assisted living facility.

This two and one-half story square plan Second Empire residence has a rubble limestone foundation and running bond brick walls. The Mansard roof has slate shingles with paired brackets under the eaves. It has a shed roof porch with pediment over entry, square posts, brackets and spindle work open balustrade and frieze.

This home was built for John Bower (1821-1906) between 1886-1889. Mr. Bower was a local merchant and tailor. It was one of the first large homes built on the North Hill. This building suffered a fire several years ago. It is now owned by attorney Angelo Papa.

The Raney-Jameson castle is a two and one-half story, square Queen Anne residence. It is of coursed, rock faced limestone construction with a limestone foundation. The main architectural points are the round tower in the south bay with conical roof, the square turret and the main gable wood with decorative patterns.

The home was built in approximately 1892 for the Leander Raney family. Local architect, S. W. Foulke, who also designed the First Presbyterian Church, among other buildings in the city, designed it. Mr. Raney, a local industrialist and community leader was affiliated with the Raney & Burger Iron Works and Raney Milling Company. He is the grandfather of Howard Kirk of Kirk Hutton Hardware.

In 1907, David Jameson (1856-1927), one of the founders of Citizens Bank, purchased the castle. It was through Mr. Jameson’s philanthropy that the Jameson Memorial Hospital was established. The Jameson family occupied the home until 1941. It has served as a nurses’ home for the hospital from 1941-1963, a dormitory for the New Castle Business College, and has been a personal care home.

It was badly damaged by a fire in May, 1998 and the original slate roof cannot be replaced.

This home was built in 1897 for Robert C. Howe, bookkeeper for the New Castle Wire Nail Company. In 1925, the home was sold to Percy Craig, Vice-president of Lawrence Savings and Trust Bank.

Future Additions to our Walking Tour