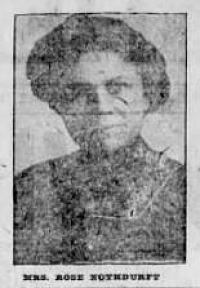 A little more than a year after the 19th Amendment was passed and women won the right to vote, Lawrence County was faced with a first.

Nearly a dozen women became candidates in the 1921 election. The primary saw the largest enrollment of voters in the history of the county. A large percentage of the enrollment was made up of women. It caused quite a stir in political circles where it “had been presumed that the so-called ‘feminine vote’ would be more or less of a negligible quantity.”

The election resulted in many women winning seats as new directors on city and township school boards.

Photo: 1921 Winners of New Castle City Offices; includes Mrs. Rose Nothdruft, the first women to be elected to the Board of Education in New Castle.

Addendum from Andrew Henley
Jane Gilmore was my second great-aunt! She eventually moved to Alameda, California where she died in 1962 at the age of 86.