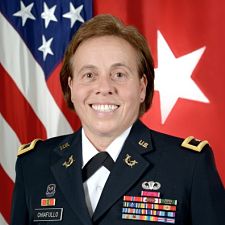 The most recent Lawrence County native to attain the rank of Brigadier General is also the County’s first woman to do so. 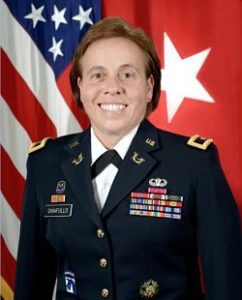 Chiafullo graduated from Union High School in 1979 and received her Bachelor of Science in Education from Slippery Rock University in 1983. She spent three years as a junior high school teacher and coach at Cotulla Independent School District, Cotulla, Texas. In 1990, she was commissioned in the Quartermaster Corps following Officer Candidate School.

Chiafullo currently serves as the full time Chief of Staff for the U.S. Army Reserve Legal Command. The command provides the Army with trained, committed and professional legal forces in furtherance of global military operations.

Col. Chiafullo was promoted to Brigadier General on October 3, 2016 in Arlington, VA.

The first woman ever to wear the stars of a general officer in the U. S. Armed Forces was Anna Mae Hays, who was nominated for the position by President Richard M. Nixon in 1970.