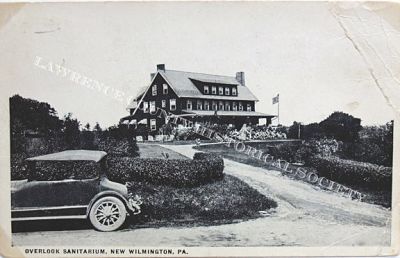 The Overlook Sanitarium in New Wilmington, Pennsylvania, was founded in 1911 by Dr. Elizabeth McLaughry, the earliest woman physician in New Castle and one of the first in the state of Pennsylvania. She was born in New Wilmington on September 29, 1865, graduated from Westminster College in 1887, and from Women’s Medical College of Philadelphia in 1894.

An Expert in Nervous Disorders

Dr. McLaughry studied nervous disorders in the United States and throughout Europe. Overlook was built on her family farm on McKinley Heights. While Overlook dealt mainly with patients having nervous disorders, it also treated patients with physical ailments including such things as tuberculosis. Patients were encouraged to make use of the beautiful grounds and the peaceful vistas. The facility was originally built at a cost of $25,000 in 1911.

The Overlook underwent an expansion in 1930. Dr. McLaughry served as the Director of the facility until 1945. When she died in 1967 at the age of 102, the facility was turned over by her estate to the “Overlook Medical Clinic, Inc.” In 1969 the clinic underwent another 30-room, $370,000 expansion to accommodate 67 patients.

Today the Overlook Medical Clinic continues to operate on the same property overlooking Westminster College, as a skilled nursing, rehabilitation and assisted living center for up to 115 patients. They have onsite physical, speech and occupational therapy, dental and eye care, radiology, laboratory, pharmacy, podiatry and psychiatry in addition to the medical staff for both short and long term placements.

From the Overlook Sanitarium Pamphlet (circa 1915)

When we toil under strain and stress,
the Sanitarium provides the shelter of
simple life, free of responsibility and
conducive to recover.
- Jastrow