Our Museum houses a large Ira D. Sankey collection in a room devoted especially to Sankey. Please visit and peruse his hymn books or view never seen before Sankey photographs and diaries. Our collection includes the following rarities:

One of the most famous Lawrence Countians, Ira Sankey, achieved international fame as a singer, evangelist and writer of gospel hymns. His influence through the songs he sang and wrote helped to change the attitude of many in the late 19th century churches from hostility toward “worldly” music to acceptance of gospel hymns as a means of reaching the hearts of believers.

Ira David Sankey was born August 28, 1840, in Edinburg, Pennsylvania. He was the son of David Sankey (known as the father of Lawrence County) and Mary Leeper Sankey. At age 16, he was converted at a revival meeting at the King’s Chapel Church, about three miles from his home.

While attending a YMCA international convention at Indianapolis, Indiana, in 1870, his singing and leadership came to the attention of Dwight L. Moody, a Chicago evangelist. Sankey, after serving briefly in the Union Army, had married Fanny Victoria Edwards and had two small children and a good job when Moody insisted that he come to Chicago to work with him.

After only six months there, the great Chicago fire of Oct. 8, 1871 destroyed their church along with much of the city. He returned in 1872 to continue the work.

In June 1873, Moody and Sankey made the first of several trips to Great Britain. In two years, the evangelists ministered to many gatherings of thousands of people, to students at Oxford and Cambridge, to Queen Victoria and others of the royal family.

Ira Sankey’s cabinet organ, which he took with him on his many evangelistic journeys, was called a “Kist O’Whistles” in Scotland. The organ is on permanent display in the Sankey room at the Lawrence County Historical Society’s Clavelli History Center.

Throughout the English-speaking world, Sankey and Moody were the greatest team of evangelists of the 1870s, ’80s and ’90s. Sankey’s inspiring baritone voice was heard in Egypt, Jerusalem, Rome, Mexico, and in most of the cities of America, England and Scotland. While in England in 1873, Sankey printed a little pamphlet of 23 of his favorite “Sacred Songs and Solos.” It was well received, and eventually grew to a book of 1,200 pieces. At one time Sankey’s books of hymns had sold more copies than any book save the Bible. One publisher sold more than 80 million copies. Only some of the hymns were written by Sankey. Most were composed by other writers, many of whom were his friends and contemporaries.

The Ninety and Nine Hymn

His most famous hymn, “The Ninety and Nine,” is a poem written by Elizabeth Clephane. Called upon by Moody for an additional solo at a service in Edinburgh, Scotland, Sankey was inspired to play on the organ the melody not previously composed as he sang the words he had clipped from the newspaper a few days earlier. Another of his favorites, sung many times, including at a memorial service for Queen Victoria’s grandson, was “Sometime We’ll Understand,” the words of which were written by Rev. Maxwell N. Cornelius, D.D., a native of North Beaver Township, Lawrence County.

This fascinating caricature of Mr ID Sankey by Carlo Pellegrini was published on April 10,1875. 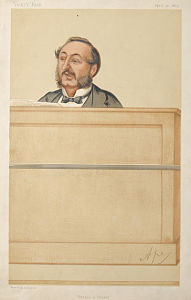 The following is an original recording (1898) of Sankey singing a few lines of “The Ninety and Nine” hymn. 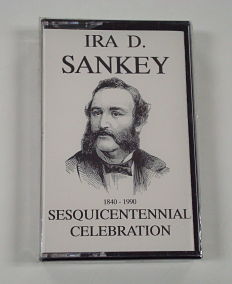 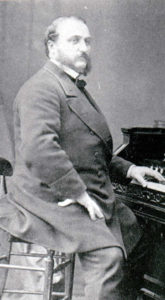 Sankey circa 1876 photo courtesy of https://www.flickr.com/photos/internetarchivebookimages/14595982267/