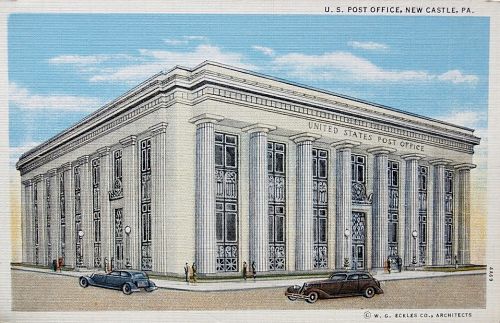 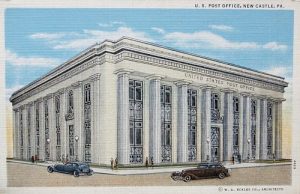 The Public Buildings Act of 1926 authorized $50M for the construction of federal buildings in Washington DC, and earmarked an additional $150M for construction projects outside the District of Columbia. It also permitted the hire of private architects for the design of federal buildings. The passage of this act heralded the beginning of the country’s largest public buildings construction program. The program was overseen by the Secretary of the Treasury, Andrew W. Mellon, Pittsburgh financier and art collector. (It was under this program that the Federal Triangle in Washington DC was designed and constructed.)

The stock market crash of 1929 caused a temporary lull in the program. Congress, however, understood that federal construction was a way to put people back to work and repair the country’s infrastructure. So in 1930 the program received renewed interest, and a new post office for New Castle, which had been on a deferred list, rose to the top. A total of $525,000 including cost of properties had been appropriated for the project. (or $9,804,931.82 in 2018 dollars)

In September 1931, it was announced that the building would be located on the South Western corner of the public square. Half-dozen or more buildings had to be razed, or removed, including a livery stable and a blacksmith’s shop. The Clark property had been bought outright by the government with a provision that Mrs. Clark was to be allowed to remain in her home indefinitely. The space would eventually become a grass plot to embellish the grounds. Frengel & Snyder, a local company, completed excavation of the site in March,1933.

W. G. Eckles architectural firm was chosen by the government to draw up the plans, which were completed by Robert A. Eckles and W. I. Clark who designed the building describing it as modernized classic treatment of the classic style which was typical of Washington and the national government. Plans were laid out in such a way as to avoid interference with Mrs. Clark’s residence. Materials included sandstone, granite, marble and bronze. (In 1934 the Roosevelt administration changed its policy to eliminate the use of marble, granite and bronze, and substitute plaster, iron and concrete. Luckily, it did not affect this project.)

The construction contract was awarded December 10, 1932 to A. W. Kutsche Company of Detroit, at a cost of $209,500 ($3,912,634.70 in 2018 dollars). Under the contract, the building was to be of sandstone. Then Congressman J. Howard Swick hoped that this would allow the use of local building stone. Steel was provided by Bridge & Iron Works, Rochester, PA; subcontractor for steel erection work was Diamond Construction of Youngstown; Hoyland & Mercer local brick contractors provided some 500,000 bricks used in the basement; New Castle masons were used throughout; sandstone was provided by Pennsylvania Sandstone Corporation in Clearfield, PA; Matthew Leibo & Son of New Castle, set the stone which came from Clearfield, PA; waterproofing the walls completed by Lawrence Roofing and Supply Co. of New Castle. In July 1929, the first of a group of monster stone pillar blocks, weighing 10 ton each, was set in place.

On June 30, 1933 the cornerstone was lowered by a crane and filed with a small box of papers, photographs and documents that represented the New Castle of 1933, while the Cascade Band of B. J. Biondi played the national anthem.

In October 1933 citizens and Congressman Swick claimed the stone being provided on the building was inferior, not cut properly, and the resultant work was patchy. A work stoppage occurred until February until claims were investigated. The Treasury Department permitted the contractor to switch from Pennsylvania sandstone to Indiana limestone when the work had risen as high as the pillar tops.

Construction was completed and a dedication ceremony was held on December 15, 1934. The US Post Office soon occupied the first floor, part of the second floor and basement. The Bureau of Internal Revenue, Civil Service Commission, Department of War, Navy Department and the Labor Department utilized the balance of the second floor. Murals, which had graced the walls of many of the Post Offices of the time, were planned, but economic constraints forced the Treasury Department to cut funding in 1937.