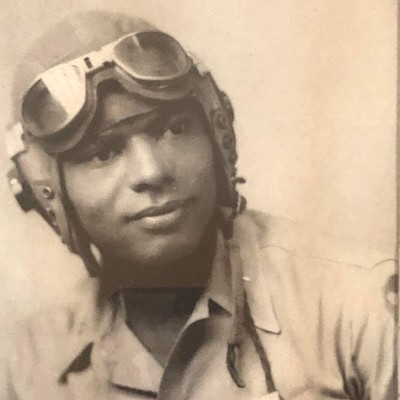 William Thomas Hunt (Tom) was born January 25, 1920, in Newport News, Virginia (VA) to James C. and Roberta Stith Hunt. When people speak of Mr. Hunt, they speak of his quiet demeanor and great character. Tom was the second eldest of thirteen (13) children. The strength of his character was due to tightly knit family traditions and family life experiences in Newport News.

During his formative years, the Hunt family moved to Uniontown, Pennsylvania (PA), where Tom graduated with honors from North Union High School (known today as Laurel Highlands High School). During high school, Tom was recognized as a high achiever and mostly recognized for his outstanding skills in mathematics.

In 1941, Mr. Hunt joined the U.S. Army Air Corps (known today as the Air Force) and served during World War II. Mr. Hunt earned the rank of Sgt. and is recognized as one of the documented original Tuskegee Airmen (DOTA – see reference below)

The Tuskegee Airmen refers to all who were involved in the so-called “Tuskegee Experience,” the Army Air Corps program to train African Americans to fly and maintain combat aircraft. The Tuskegee Airmen included pilots, navigators, bombardiers, maintenance and support staff, instructors, and all the personnel who kept the planes and pilots in the air.

Military honors and qualifications include:

Although having been honorably discharged from the military and despite having served his country with honor and dignity, he faced a country filled with bigotry, hatred and social prejudice. Opportunities consistent with his talents and skill level were limited. And like others that had gone before him, he did not let those injustices dwell in him. Through perseverance and his faith in God, he relocated his young family to Ellwood City, PA, where he found a better opportunity with the National Plumbing Corporation. A few years later (1960), Mr. Hunt relocated to New Castle, PA, where he built a strong career with Rockwell Standard Corporation as Quality Control Inspector that lasted for a few decades. He lived on N. Front Street and and later moved to South Round Street.

Family life in New Castle was enriched by Tom’s highly respected reputation in the community. He and his family joined Union Baptist Church where he became a member of the leadership team. For almost 20 years, he served in officer roles as Treasurer, Superintendent of Sunday School, and Chairman of the Deacon Board.

Mr. Hunt was a sports enthusiast and followed all sports. He loved the game of baseball especially and was known as a baseball strategist. He taught and coached the game when time permitted. While he also followed the Steelers as a fan, his greatest love was for the Pittsburgh Pirates. If not attending a game in person, he would watch each game if broadcasted on TV. If not, he would listen to the radio endlessly for hours.

Also, few people outside of Mr. Hunt’s inner circle knew about his extremely close relationship with the Davis family of Uniontown. He maintained a special relationship providing counsel and friendship to both Chuckie Davis, an All-American basketball player who graduated from Westminster College and who later played with the Globetrotters, and Ernie Davis (Chuckie’s nephew) an All-American football player, out of Syracuse University, who was the first Black player to win the Heisman Trophy and was the number 1 draft pick in 1962 in the NFL.

During his lifetime, Mr. Hunt received numerous community and civic awards.
Posthumously, Mr. Hunt has been honored and recognized with numerous awards. During the mid-1990’s, he was honored as a Tuskegee Airman by the New Castle NAACP.

In 2013, he was honored along with 100 other airmen by the Tuskegee Airmen Memorial of Western Pennsylvania (TAM) with two dedication ceremonies:

On March 29, 2007, the Tuskegee Airmen as a group (not individually) were presented with the Congressional Gold Medal by President George W. Bush and the US Congress at a ceremony inside the Rotunda of the US Capitol.

After an extended illness, Mr. Hunt passed away on September 26, 1980.

WATCH a 90 min documentary by Lucasfilm on YouTube: Double Victory: The Tuskegee Airmen at War

PHOTO CREDITS: portraits provided by the family of Sgt. Hunt. The photo of the Army Air Force Technician Badge and Mechanics Bar is a facsimile adapted from a creative commons photo.

Does this sound interesting? Share it with your friends!
Tags: Black History, World War II