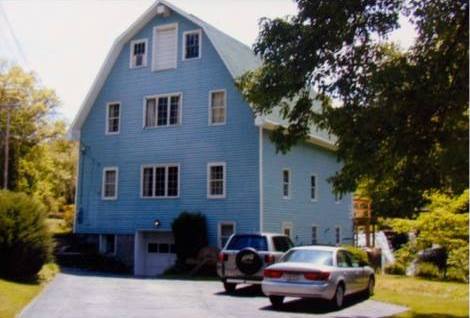 The first grist mill in Hickory Township was built by Henry Reynolds on Hettenbaugh Run, a mile east of the village of Eastbrook.

According to the 1877 History of Lawrence County

“[Reynolds] … operated it till 1837, when he sold out to William Adams and went West. The mill was built about 1823-25, and is yet standing, having been repaired considerably. It is just in the edge of Hickory township; the same mill-stones that were first put in are still in use, but the dam has been built down the stream from the original one, which was torn away when the old saw-mill, which stood near it, was removed. The saw-mill was put up before the grist-mill. The boundary between Hickory and Scott townships is very nearly on the present dam. The grist-mill is now owned by Robert McCurdy and brother, and is doing an extensive custom business. This mill was the first one erected within the present limits of the township, and, not being very large, is often inconveniently crowded with work, it being well-known that the work done is excellent. It is one of the most popular mills in the country. The supply of water in the run is usually large enough, so that no inconvenience is experienced with a low stage. It is fed almost entirely by springs.”

By 1899 it was thought to be the only mill in Lawrence County that turned out flour by the old buhr process, utilizing stone brought from France. In 1900, McCurdy built a new dam. A storm in 1903 carried away many of the large foundation stones of the mill itself and severely damaged the dam.

Mr. & Mrs. Bayer purchased the property and renovated the mill prior to selling it in 2004. The “mill” with seven acres has been offered for sale as of August 2014.