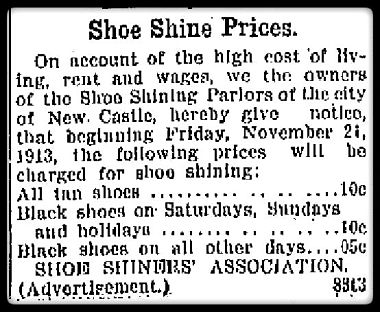 “Judge” was a former black slave, born in Virginia. He came North sometime after his emancipation. He was at one time married, but later widowed, with no indication as to any children. He was a well known “aristocrat bootblack” in New Castle for many years and resided at one time at 32 Bell Ave. 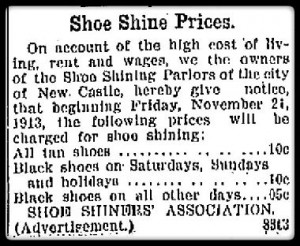 Judge’s real name was James M. Faulkner. During the Civil War, he was a young slave at the plantation of Major Marshall McCue at Mossy Creek, 15 miles from Staunton, in the Shenandoah Valley. Major McCue was a member of the Confederate congress and was quite prominent at the time, prominent enough to warrant a visit to his plantation from General Stonewall Jackson. Judge waited on him at the table and would later, recalling his memories, vividly describe Jackson. Also during the war he waited on General Jubal A. Early when Early was raiding the Shenandoah Valley and was being pursued by General Phil Sheridan.

Judge always dreamt about returning to Virginia. He went “South” one winter to East Liverpool, Ohio closing up shop here for a few months. His eyesight began to fail and his shines were lacking. As a result he began to lose clients and he had little income to support himself. He stayed for a time in the City home. He left and tried his trade in Mercer County working in Grove City and other localities there. Coming back to New Castle he tried to revive his business. Every night he would go into the City building, walk down the stairs to the bunk room (municipal lodging house) to spend the night, cover himself with a newspaper and announce “this will be my last night here.” His health was failing fast and he complained that he was going to die. He spent considerable time moaning in the police station or in the city hall. Finally, he was ordered to the City home/poor farm and was to be taken out of the municipal building by the police if he did not go willingly. His stay was short at the City home and he again left, wandering the streets of New Castle. He went to Youngstown for a short time, but again returned staying either at the City home or somewhere in the streets.

Judge became a problem to the City. He asked the mayor to give him a sidewalk where he could shine shoes or give him enough money to realize his dream of going back to Old Virginia. The city decided to provide him those funds, but Judge died shortly after his request in October 1914. His death and burial occurred at the City home.