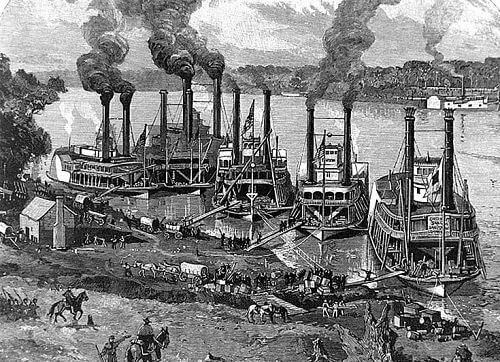 When the Civil War began, patriotic men rose to the call to fight. But women, barred from the military, were also eager to aid in the effort. Relief societies sprang up across the country. In a short time many of these efforts were consolidated into the U. S. Sanitary Commission that was made up of and run primarily by women. This all civilian organization functioned much like today’s Red Cross. Operating on private funds, it was sanctioned by the U. S. Government.

During the war, the US Sanitary Commission contributed some $50 million in relief (over $1 billion in today’s currency) in the form of food, bandages, clothing, bedding, outfitting and manning hospitals and hospital ships, and convalescent homes, and transporting the injured. In addition to supplying provisions, it also “manned” field hospitals with nursing and logistical personnel, who worked hand in hand with the military.

One of these patriotic and unsung heroines was Elizabeth “Eliza” Jane (Hawthorne) Locke. She was born in New Castle on September 2, 1810. At 16 years of age, she became a member of the Presbyterian church and on May 1, 1839, she married Rev. James R. Locke, a member of the Methodist Episcopal church. By June 1860, the couple had moved to Quincy, Illinois. Her husband joined the 2nd Cav. Reg. Ill.

Locke Volunteers as a Chaplain

While her husband served in the military, this 50-year old woman was commissioned as a Field Agent by the Cincinnati office of the U. S. Sanitary Commission. Elizabeth’s obituary states that she looked “after the interests of the sick and wounded soldiers in the hospitals, military posts and in the field. This involved much travel, exposure, hard toil and care to superintend the proper distribution of the hospital stores for the relief of sick and wounded. Many a poor soldier secured comforts and enjoyed favors without ever knowing to whose kind ministries they were due. She continued in this work even after the war had closed so long as there remained any sick or wounded to care for.”

In the fall of 1862, Grant took about 30,000 Union troops into Mississippi and established a supply base at Holly Springs. He crammed all the buildings to capacity with whiskey, canned goods, clothing and other items. On the railroad tracks were enough filled cars to make three normal sized trains. Grant continued with his troops to Vicksburg. Left scattered near the base were some 1,500 Union men, including men from the 2nd Reg. Ill. Volunteers. On December 20, 1862, the base was hit by Confederate troops who easily captured the camp. The Confederates rounded up about 1,000 prisoners. Eliza was engaged in service for the Sanitary Commission at the time and she and her husband were among those taken prisoner. All of the Union supplies and provisions in the town were burned, along with the former Confederate arsenal that the Union was converting for hospital use. After destruction of the supplies, the Confederates paroled the prisoners.

(Note: It is believed Eliza was the daughter of Alexander Hawthorne of New Castle whose heirs were known to have moved to Illinois. She died before her husband and left an estate of several thousand dollars.)

Does this sound interesting? Share it with your friends!
Tags: Civil War, Women