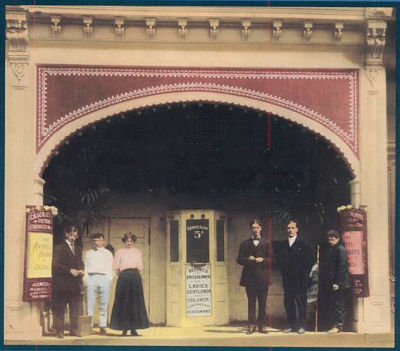 Harry, Sam and Abe Warner started out in the film business in a makeshift tent in the backyard of their Youngstown, Ohio home in the fall of 1906, purchasing a used projector and worn copy of “The Great Train Robbery”. After showing the film to their family, neighbors, and the customers of their parents’ grocery store, the young men were convinced that their venture could be a success.

Word had it that a carnival was opening in Niles, Ohio. They were able to find a vacant store front, hung a sheet on the wall and grabbed whatever chairs and benches they could find. Tacking up handmade posters all over Niles, Sam ran the projector and Abe sold the tickets. The showings were a success and Sam and Abe took their earnings, packed up their projector and took it on a traveling circuit using empty storefronts in Sharon, Meadville, Stuebenville, Warren and New Castle. Not long after they hit New Castle during the winter of 1906*, a blizzard hit too. They had enough money to get a cup of coffee and a street car ride back to Youngstown.

Harry soon decided that they had to lease their own permanent theater.

Youngstown wasn’t a good choice as it already had many nickelodeons. Sam suggested that New Castle be the chosen location since they did well before the blizzard ran them out of town. New Castle had a growing steel industry and new workers were coming in all of the time. Its proximity to their home in Youngstown made it ideal to get back and forth via trolley. Their investigation at the time showed that the only other entertainment in New Castle was the Genkinger Opera House (vaudeville) and Cascade Park.

The landlord who owned the old Knox-Inn on Mill Street allowed them to convert some empty rooms into a small hall.

[/pullquote]They built a platform to hold the projector and painted the opposite wall white. Looking much like a storage warehouse, a couple of modest oil lights were added on the side walls to light the way for female patrons. The hall had no seating so a deal was struck with an undertaker a few doors away to borrow 99 chairs (100 seats would have required certain safety requirements).

A carnation was given to each lady who entered the theater. A sign was posted outside:

They hadn’t noticed the misspelling.

The next slide read:
[label style=”info”]LADIES! KINDLY REMOVE YOUR HATS[/label]

and the last slide implored:
[label style=”info”]GENTLEMEN! PLEASE DON’T SPIT ON THE FLOOR[/label]

Harry would later recall the setup at the Cascade.[quote style=”1″]It was a queer affair. We used a salt herring barrel filled with wet salt from a rheostat and my brother Sam, the family projectionist was continually getting shocked.[/quote]

The day after the opening, a crowd of people four-abreast, were on the sidewalk waiting in line. The steelworkers of New Castle were pouring into the Cascade Theatre! Abe took over the management of the theater, staying in town at the Sherman Hotel. Daniel Robbins became associated with Warner in running the business that was listed as “Warner & Robbins” in the 1907 City Directory. (Robbins may have been a relative. Ann Warner, a sister, married Dave Robbins from Youngstown.)

Showing new films was necessary to keep the crowds and revenue coming in and renting films was becoming excessively expensive. Harry joined with some other movie theaters and formed an exchange, thereby cutting everyone’s cost. He soon discovered that the real money wasn’t in showing films, but in renting them out. The brothers thus formed a distribution company that they named “Duquesne Amusement Supply Company” located in Pittsburgh, meanwhile continuing the theater operations here.

The Show Must Go On!

[pullquote align=”left”]The Cascade Theatre was expecting their largest crowd ever over the Memorial Day weekend.[/pullquote] Panic struck when Abe learned that they couldn’t borrow the chairs from the undertaker because of a large funeral. Fearful that it could ruin their business, Abe called the widow of the deceased and made her an offer she couldn’t refuse: Put off the funeral of her husband for one day, and she and her eight kids could watch films at no charge through Christmas. She accepted and the show went on!

The Cascade Theatre operated under the Warner Brothers management for less than 10 months. The brothers decided that the film distribution company was doing so well that they could sell the Cascade Theatre. In November 1907 Abe Warner turned the business over to Dan Robbins, who purchased the Warner brothers interest in the theater. Abe left for Virginia on November 21, 1907 where he was to assume the management of a new distribution center of the Duquesne Amusement Supply Company they were opening in Norfolk. It was at this time that younger brother Jack joined the business.

[note color=”#fbe9a3″]*Some reports state the Warner Brothers first started here in 1903 utilizing various funeral parlors etc. That date is in error based on independent research, and as reported by the Warner family in the book Hollywood Be Thy Name (1998 – author is Harry’s granddaughter Cassie Warner Sperling) which is the source of much of our article. The 1903 date may have been presumed based upon the  release date of the silent film “The Great Train Robbery” (December 1, 1903). [/note]

Does this sound interesting? Share with your friends!
Tags: Warner Brothers