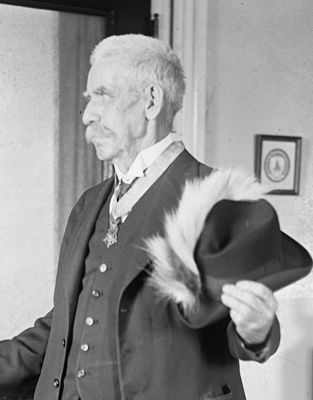 Cyrus B. Lower was born February 18, 1843 in Mahoning Township, the son of Samuel and Mary Bryan Lower. His father had moved to Western Pennsylvania about 1825 and settled near Edinburg.

After the start of the Civil War, Cyrus enlisted at Poland, OH in the 23d Ohio Infantry, with the likes of former Presidents R. B. Hayes and William McKinley. Lower was discharged after having been shot, a rifle ball having entered through his hand and passed through his wrist joint. He returned to Edinburg, recovered and joined Co. K. 13th Pa. Reserves. (The unit was known as the “Old Bucktails” named for the deer buck tails they wore on their hats.)

In the Battle of the Wilderness he was a member of a reconnoitering party, and received a wound for which he was ordered to the rear, but he kept on with the skirmish line instead until the fight was over. He then went to the hospital, but before his wound healed he rejoined his regiment and participated in the actions at Spottsylvania, North Anna and Bethesda Church. He was captured at Bethesda and was being shipped to the prisoner of war camp at Andersonville, GA when he jumped from the moving train making his escape. After a dangerous trek, he made his way back to West Virginia and Union Troops.

After the war he came back to Lawrence County running a nursery business and was superintendent of the Greenwood Cemetery. He was also a member of the Masonic Lodge. He moved to Washington DC and was a night watchman for the Safe Deposit Co. and later went to work for the US Department of Agriculture. He retired from the Department of Agriculture as Director of Supply after 25 years of service.

Cyrus B. Lower was award the Congressional Medal of Honor in 1887 for his gallant services in the battle of the Wilderness May 7, 1864 and soldierly qualities in returning to his command after being wounded and also for voluntarily joining his command through great difficulties after capture and escape from the enemy.

Cyrus B. Lower is one of only three Lawrence County residents who received the Medal of Honor, the highest award for valor in action against an enemy force. Joseph B. Chambers also received his for services in the Civil War and Leslie H. Sabo, Jr. (awarded posthumously), received the medal for his actions during the Cambodian Campaign in 1970.

Photo of Cyrus B. Lower: taken at the time of his retirement. He is wearing his Medal of Honor and holding a hat with a Bucktail.

Lower’s and Joseph B. Chambers’ bravery are recognized and honored by a memorial at the Lawrence County Court House, that was unveiled on Veteran’s Day, November 13, 2000.

Does this sound interesting? Share with your friends!
Tags: Civil War, Medal of Honor