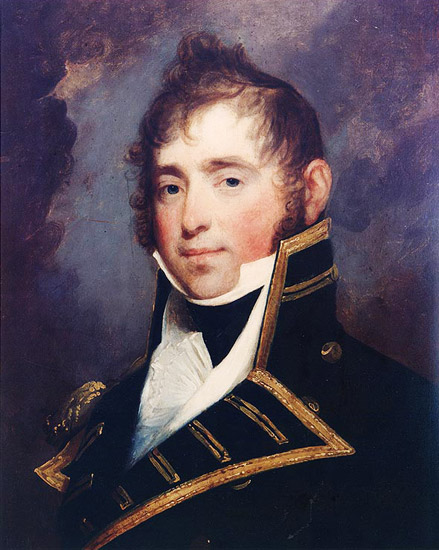 WHAT DOES WHAT HAPPENED 200 YEARS AGO ON LAKE ERIE HAVE TO DO WITH LAWRENCE COUNTY?

Lawrence was mortally wounded by small arms fire. He ordered his officers, “Don’t give up the ship!” as his crew carried him below. His ship was soon overtaken by the enemy and he died three days later. When fellow officer Oliver Hazard Perry learned of his friend’s death, he ordered a large blue battle flag, stitched with Lawrence’s battle cry “Dont Give Up The Ship” (sic) in bold white letters. The flag was displayed on Perry’s flagship, the newly built USS Lawrence, during his victorious engagement against the British on Lake Erie 200 years ago September 10, 1813.

The USS Lawrence was disabled by enemy fire and Perry transferred to her sister-ship the Niagara (photo). In 1815 following the end of the war the USS Lawrence was sunk in Misery Bay on Presque Isle to preserve her hull where she remained for nearly 60 years.

In 1875 (photo) the USS Lawrence was raised and put on exhibition at the US Centennial International Exhibition of 1876 Philadelphia, but she was destroyed by a fire during the exhibition.

Here, as early as 1820 there was a push for the erection of a new county from portions of Mercer, Beaver and Butler counties and the efforts continued with many failures and disappointments. Many petitions were presented to the Legislature and lost. But the people would not give up the matter. The people adopted the well-known motto of Capt. Lawrence: “Don’t Give up the Ship” and proposed to fight until successful, vowing to name the new county after him. They fought on for nearly 30 years and the bill for dividing the counties was finally passed in the House in March 1849, by the Senate a few days later and was signed by the Governor Wm. F. Johnston on 5 April 1849.

From August 29 to Sept 2, 2013 the Tall Ships are gathering on Lake Erie commemorating the 200th Anniversary of Perry’s victory.

In Lawrence County, the LCHS will present a program on the War of 1812 and these two great naval heroes on October 9, 2013. Local historian, Chuck King will be the presenter, and will display relics of the War. At the program, Mr. King will present a portrait of Capt. Lawrence which he commissioned his daughter, artist Jennifer King, to paint. All Historical Society’s programs are free and open to the public. For more information, visit our events calendar or call the Society at 724 658-4022. Free admission to the public.

Does this sound interesting? Share with your friends!
Tags: War 1812