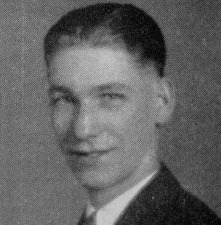 The December 7, 1941 surprise attack on Pearl Harbor resulted in the death of a local man. James McClintock of Wampum is believed to be the only known individual from Lawrence County to die as a result of the attack. James’ youngest brother, Elmer, had already completed a tour in the Navy and had promised his mother, Mrs. Martha McClintock, that he would stay at home to support her. His attitude changed however when he received word that James had been killed. Elmer re-upped with the idea of seeking revenge for his brother’s death.

Mrs. McClintock also had two daughters. Daughter Mary McClintock (Gray) Richards formerly of Wampum, worked as a welder for American Bridge Company Shipbuilding Yard in Ambridge, Pennsylvania. Mrs. Mary Richards was chosen by vote of her co-workers to officiate the launching of the  USS LST Ship No. 281 (Tank Landing Ship) due to the fact that she had lost one brother and had a husband, a son, and four other brothers serving in the war.

At the Ambridge yard launching ceremony on September 30, 1943, the general manager of the plant said that USS LST-281 was christened in remembrance of James McClintock, who lost his life in the service of his county. The LST-281 earned three battle stars for World War II service.