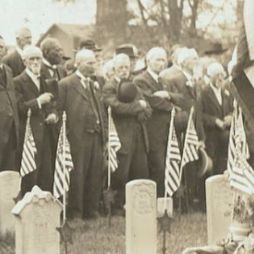 Many have studied the Civil War history of the infamous 100th Pennsylvania Volunteer Regiment, popularly known as the Roundheads. Books have been written, and websites and Facebook pages have been devoted to these brave men who mustered in from Western Pennsylvania counties.

But there was one Black man who slipped through the cracks of the modern-day history of this celebrated Regiment. Perhaps because he did not muster in locally. This man’s service was accidentally discovered recently when our Andrew Henley* was gathering research on a New Castle man who was one of the first Black graduates of Howard College of Medicine.

That man, Dr. Lawrence Ellsworth Jones, it was found, was born in New Castle to former slaves, Anderson Jones and Margaret Carter Jones.

Anderson was born in Petersburg, Virginia on October 17, 1839. During the Civil War he was “drafted” by the Confederates to dig trenches. He made his way to Union soldiers near Petersburg, and attached himself to the Roundheads as a cook of Company H. His enlistment date shows August 18, 1864 which would have put the Roundheads at the Siege at Petersburg.

He was picked up by the 127th Infantry U. S. Colored Troops and sent for training. Returning to Petersburg, the 127th took part in the siege operations against Petersburg and Richmond, VA from September 1864, to April 1865. When he joined the 127th his name was entered “Jones, Anderson.” Then a first sergeant was said to have corrupted the name to “John Sanderson” and then to “John Sanders” under which Jones’ service went into the final records.

At the end of the war, he joined the Roundheads in their return to New Castle. He married Margaret Carter of Petersburg, who later joined him here. The couple resided at 31/33 East Street, next to the First Baptist Church, where he would live for over 50 years.

From Roundhead to Woolbuyer and On

Early on, he was employed as a wool buyer for Judge Robert Cochran, a merchant, and also for James J. Montgomery, a local wool and grain merchant. In 1900 his occupation is listed as a drayman, which was a driver of a flatbed horse-drawn wagon, without sides, to transport various goods. He was also a laborer and known to perform janitorial services for the city of New Castle.

The family were members of Central Presbyterian Church, a successor to the Free Presbyterian, an abolitionist church.

While in New Castle, Jones is seen as having participated in many of the Roundhead Reunions. He was also active in the affairs of the Grand Army of the Republic (G.A.R.) and the Union Veterans Legion. In 1899, Jones received a gift of a gold-headed cane by the Civil War Vets of Encampment No. 9, Union Veterans Legion. It was presented by Col. J. S. DuShane to celebrate Jones’ birthday. (DuShane had served in Company K of the Roundheads.) Jones is also listed in the 1890 Veterans Schedules of the US Federal Census as Jones Anderson.

In 1904, an elderly Jones applied for a Civil War pension. To the surprise of many, Anderson was arrested in 1906 in New Castle by a US Marshall from Pittsburgh for falsifying pension documents to secure a pension. The pension examiner found that another man from Mississippi named Saunders served in the 127th regiment, and that Anderson was not enrolled. This man was already receiving benefits. (Anderson’s alias John Sanders is listed in the History of Pennsylvania Volunteers 1861-1865 and History of Lawrence County, PA 1877 being with the 127th. Jones was not recognized in Bates’ Roster but does show up in the American Civil War Database Roundheads roster.)

Former Judge William D. Wallace of New Castle, served as Anderson’s counsel at his fraud hearing. He told the U. S. District Court in Pittsburgh that Jones had an excellent reputation, and explained how the Roundheads had picked him up, and his service to them as a cook. Wallace told the court that Anderson had been the pet of the Grand Army men in the vicinity, and he intended no fraud. The U. S. Attorney agreed but wanted the pension examiner to be heard before disposing of the case. While it appears they dropped the fraud charge, Anderson shamelessly was never granted a pension.

Anderson continued to be involved with his community. He was a founding member of a Black Elk’s organization, the Improved Benevolent and Protective Order of Elks in 1916. (wiki link https://en.wikipedia.org/wiki/Improved_Benevolent_and_Protective_Order_of_Elks_of_the_World)

In September 1909 Anderson’s wife died. She was born December 1854 at Richmond, VA Anderson died July 19, 1929. They are buried at Greenwood Cemetery. His tombstone reads:

No Photograph of His Service 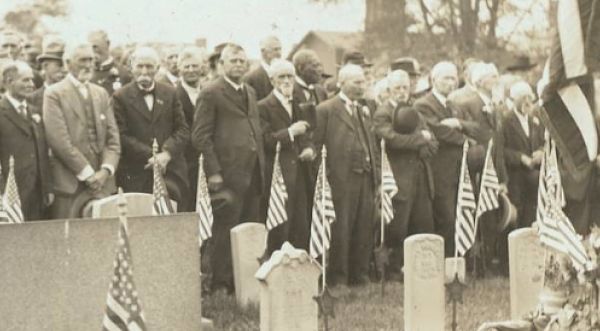 While we were unable to find a photograph identifying Mr. Jones, we did find a photo of the local G. A. R. contingent at the soldiers’ plot at Greenwood Cemetery, Memorial Day in 1917. There is a lone elderly Black man standing among the other soldiers. I’d like to believe it is him.

* Special thanks go to David Welch, Michael Kraus and Ken Turner, our go-to experts on all things Roundheads, who collaborated with the Historical Society in gathering information utilized in this article.