Sometime after John Stockman discovered coal in Lawrence County in 1810, it was found there was a heavy coal deposit in Neshannock township in the area now known as Highland Heights or Coal Town. For many years the area was known as Coal City. In 1850 it was decided by the iron interests of the time, that there was a need for better transportation to and from the coal banks in Neshannock Township.

A corporation was formed to build a “plank” road. The road started on East Falls at Mill, west to N. Mercer, North on Mercer to Grant, then back east on Grant St. and up what is now Highland Ave. to the fork and followed what is now the Old Plank Road to Coal Town. (The reason the route wasn’t direct between Falls and Grant was due to a hollow that existed at the time between the two streets.) The road was completed in 1853. One track made of three-inch oak planks eight feet in length was laid. Northbound wagons (empty) would take the un-planked dirt track. The loaded teams heading back to New Castle would take the planked track. The Plank Road was a vast improvement over the dirt road allowing two horses to haul 3-4 tons of coal. 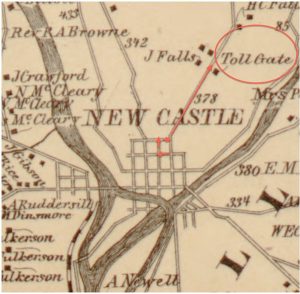 It was seen that money could be made, so a toll booth was erected by those in the iron industry and Mr. A. Cubbison was the first toll-keeper. The booth (toll gate) was located at what is now 1612 Highland Ave., between Sumner and Norwood Aves.

The toll road proved useful for its investors, coal dealers and farmers. It remained in operation until 1872, when competition with the steam railroad made it obsolete. The toll gates were removed at that time.

A narrow gage railroad had been built about that time in the coal fields of Coal Town that came down through the ravine at the northern end of Oak Park Cemetery and crossed the creek at just north of the Paper Mill Lane. Then it continued down the east bank of the creek to the ovens. 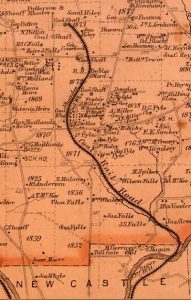 The ovens were located at the “Narrows” on the Neshannock Creek, east of what is now Rural Avenue. The ovens were built in 1871 by Lee and Patterson. They never operated steadily and were never fired after December 1886.

It was found the Neshannock Township coal was not the best type of coal for the production of coke, so the coke oven operators returned to the use of what was known as Sharon block coal.

Relics of the old coke ovens can still be seen in the Narrows section of the creek. They were at one time used by “tramps” or hobos for shelter.