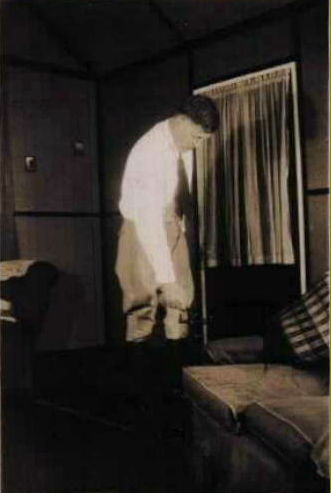 Jack Morgan (see May 24, 2013 post) was not the only New Castle son subjected to the Hell Ships. While it is not known if the two had ever met, it appears they took their final voyages together.

John B. Brettell enlisted in the Pennsylvania National Guard in 1908. During the First World War he was commissioned as a lieutenant of Infantry. Following the war he went back into the local Calvary, and took command of the unit (Troop A, 104th US Calvary) in 1920.

During the Great Depression he was assigned to the supervision of Civilian Conservation Corps camps. The CCC camps were a great relief to many men who were nearly destitute and the work of the enlistees provided much needed conservation as well as reforestation to our national and state forest areas.

An active U.S. Army officer, he re-entered civilian live at the termination of his CCC experience and was appointed Street Commissioner of New Castle, Pennsylvania. He was never really pleased with this position and shortly applied for re-activation to the regular army. He was reactivated and retained his reserve rank of Captain. In 1941 he was sent to the Philippines. Shortly after his arrival in Manila he was promoted to Major. He was serving in the Philippines when Japan attacked.

Major Brettell was one of the defenders of Bataan. During the chaotic fighting in Bataan he was promoted to Lieutenant Colonel. When American forces surrendered Colonel Brettell became a Prisoner of War and was a member of the infamous “Bataan Death March”. He survived the “Death March” and was imprisoned at Camp O’Donnell and later Cabanatuan. He was then removed to Bilibid prison in Manila and from there placed aboard a ship, along with about 1,500 other officers and enlisted men for transport to Japan. This ship was bombed by American planes and sunk. He survived this sinking and was transported to San Fernando for further shipment aboard another ship. This ship arrived at Takao, Formosa and it too was bombed. The survivors were transferred to yet another ship and it left for Japan. Conditions aboard all three ships were indescribably chaotic.

The ships later became known as “Hell Ships”. Men had died and were dying by the hundreds. Lieutenant Colonel Brettell died January 28, 1945 while aboard the latter ship just before it arrived in Japan. He was 55 years of age and weighed approximately 90 lbs. (former weight about 250 lbs.). He was buried at sea along with many others. His death was listed by the Japanese government as “acute colitis”, which translates for us as “starvation”.

One of his companions in the prison camps and aboard the prison ships did survive and at the end of the war came to visit his widow and son. He related all the details of their experiences, more lurid details to his son who had also served during the war than to his mother as he didn’t want to add that knowledge to her loss. (She would die four years later.)

In July 1948, members of the old Calvary units of the National Guard together with many others gathered to pay tribute to Lt. Col. Brettell at Castle View cemetery where a brass plaque was dedicated to his memory.

On November 3, 1983, by an Act of the Pennsylvania General Assembly Act, the Cherry Street bridge in New Castle was renamed the Lt. Col. John B. Brettell Bridge.