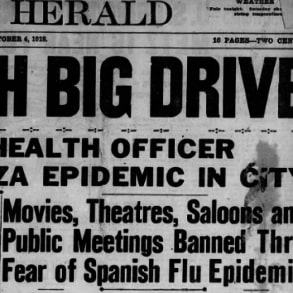 The Spanish flu or the grippe as it was also called, came in two waves. The first wave lasted three months. The city prepared for the onset of the epidemic expecting it to arrive September 16, 1918.

All public meetings of every description were prohibited.

By October 4, 1918 the state ordered all public places of entertainment, including theaters, moving picture establishments, saloons, pool rooms and dance halls closed. All public meetings of every description were prohibited. Authorities estimated that 15% percent of the population would be affected. Pleas were made to the public for supplies with which to fight the epidemic. Automobiles and chauffeurs were needed to transport nurses and doctors from place to place. Canvas tents with tent flies sized 9×9 feet and upward were needed to establish emergency hospitals. New Castle’s emergency hospital was set up in the old New Castle Country club on Vine Street.The emergency hospital had 28 beds to serve the flu and pneumonia patients but more space was needed. School teachers were asked to volunteer as nurses’ aids.

There was an urgent need in West Pittsburgh and at the Wampum emergency hospital. Over a 10th of the population of Wampum, 104 at the time, had the flu. They had three dead by 17 October. There was fear that the spread of the epidemic would also impact the Crescent Portland cement plant which was doing government work for the war. The epidemic caused delays or pauses in delivery of mail to rural residents, requiring people to pick it up at the post office.

By the 15th of October five deaths resulted in New Castle, two deaths in Enon Valley. Three New Castle Boys and one from Ellwood City died in WWI Training Camps. The YWCA in New Castle stepped up and manufactured gauze masks for those coming in contact with the victims. This was in addition to their daily rolling of bandages and making tourniquets for the war effort. Homes with individuals suffering from the flu were placarded to warn of disease. The schools were closed October 11, 1918 and were set to open Nov 11, 1918. No one was safe from the flu. County Coroner Elmer Norris died of flu related complications. The State removed the quarantine on November 5th. The premature lifting of the quarantine resulted in a surge of 95 additional cases and a new ban was put in place on November 22nd. It was later lifted on December 16, 1918. New Castle had a total of 2,801 cases.

Quarantine … closure of the stores …

Wampum had an emergency hospital as well. The first wave caused quarantine of the town and closure of the stores. In March 1919 the epidemic hit Rose Point and Princeton. Princeton had 30 cases. The worst cases were in Rose point, but thought not as severe as the previous fall.

In Ellwood the development of serious cases also required opening an emergency hospital in the former Polish club building at Crescent and 10th in the Westend. Ms. Anna Evans was in charge of the hospital. Some seventy five Ellwood women gathered at the Red Cross headquarters to make hospital shirts, and masks. Some stores donated materials. By November 9, 1918 Ellwood had 977 cases.

The second wave was milder.

The second wave was milder. Less than 700 cases had been reported to the New Castle city health department and the disease ran its course in six weeks. (March 16, 1920) They had very few serious cases and only a few fatalities. In most cases the deaths resulted from pneumonia or a complication of the disease. The old New Castle Hospital building was utilized for the city emergency influenza hospital from February 1, 1920-March 9, 1920. It was returned to its owners after it was fumigated and cleaned. Two patients who still remained in the emergency hospital were moved to the contagious disease ward of the New Castle Hospital.

George Greer, owner of the tin mill, and whose mansion is now the LCHS Museum, was stricken by the second wave of the influenza, followed by pneumonia and was in serious condition for several weeks, being ill for several months.

The city reported it “had 635 deaths during the year 1919, 432 less than during the year previous. The record for 1918 was 1,067, the difference being attributed to the influenza epidemic, as the report for the months of October, November and December for that year show. During this three months 469 deaths were recorded here. During the corresponding months of this past year, the deaths were 142.”

The Show Must Go On! (Warner Brothers)