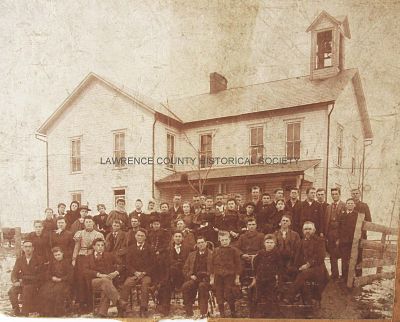 Rose Point Academy Association was incorporated on October 20, 1891 as a nonsectarian, advanced education institution. Its stated purpose was the “promotion of Christian and liberal education and the cultivation of the various branches of science, polite literature, and the fine arts.” Many students graduated and received the degree of Bachelor of Science, which the institute was permitted to bestow.

The edifice was dedicated in September 1891, having three rooms on the ground floor and a large hall on the second floor. The June 1895 term graduated 12 students. During the 1897-1898 school year, there were 75 students and four teachers. However, patronage dwindled as more students opted for the Slippery Rock Normal School, having fewer expenses and lower tuition.

After only eight years of full operation, the Academy fell into financial trouble and was forced to close. The building was used as a Slippery Rock Township high school from 1902 until 1907 when the high school location was changed to Princeton. In 1911 the building went up for sheriff’s sale and it became a private residence. It has since been demolished.

This photo, found among the photographs of the George W. Johnston family, long-time residents of Rose Point, is believed, with a high degree of certainty, to be the Academy. It is the only known photo to exist. The original was in four pieces and has been restored by the Historical Society.

Notes From a Schoolboy in the 1820s