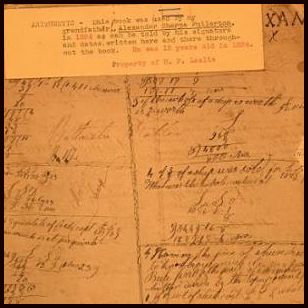 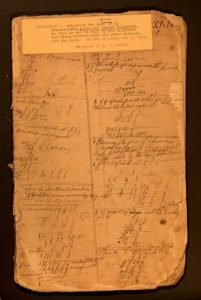 Documents written by ordinary people – such as letters, diaries, meeting minutes, or even notes scrawled in a book – can reveal as much about the past as works written by history’s great writers, politicians, and scholars. Our ancestors occasionally gift us with an artifact that at first may seem simple and insignificant, but upon closer examination provides a valuable and intimate glimpse into the everyday lived experience of the people who populate our past. Almost two hundred years ago, a young schoolboy named Alexander Sharp Fullerton carried a ledger full of handwritten arithmetic problems and other notes to a rural school in North Beaver Township. This notebook, stored in the archives of the Lawrence County Historical Society, is a valuable document that offers insight into education and rural life in Western Pennsylvania in the 1820s.

To view the ledger, CLICK ON THIS LINK: https://drive.google.com/drive/u/1/folders/0By4dH03IZ7VseFdMTWRKVWxWTDQ

Alexander Fullerton was born in 1811, according to his headstone located in the Mount Jackson Methodist Episcopal Church Cemetery [1]. Alexander’s parents, James and Margaret, arrived in North Beaver Township from Cumberland County when the former was still a frontier in 1801. James Fullerton cleared away dense underbrush, cut through the forest, and pulled out stumps to start a farm on 620 acres. The family lived in a twelve by fourteen-foot log cabin with a floor made of split logs. A homesick Margaret Fullerton allegedly carried a branch from a willow that grew in Cumberland County, her former home, to the wilds of Western Pennsylvania to plant on her new farm. The willow apparently flourished and the Fullertons became successful farmers and lived “useful, virtuous and dignified lives and set a high standard,” local historians asserted. James and Margaret had eight children: Mary, Margaret, James, Bathsheba, John, Nancy, Robert, and Alexander [2]. 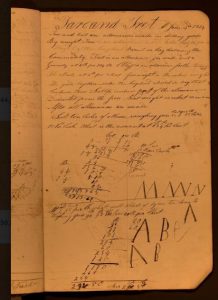 Alexander’s arithmetic notebook dates from 1824, evidenced by handwritten dates on most of the pages. He filled the pages with looping, formal cursive handwriting and long columns of handwritten figures. The remaining space that was not dedicated formal schoolwork was crammed with doodles. Almost every page is devoted to arithmetic, but a few pages contain long freehand passages that don’t seem to relate to mathematics. One page has a long passage about how to avoid speaking improperly and improve one’s diction. “Endeavor both in conversation and reading,” Alexander writes, “to pronounce every word in a deliberate, clear and distinct manner.” Another page contains a poem titled “The Looking Glass, or Ill Humour [sic] Corrected,” about a “little stubborn dame, whom no authority could tame” until a vengeful looking glass reflected her ugly behaviour back at her in the form of a disfigured visage.

Alexander solved word problems with compound division and decimal fractions, such as the problem he wrote out in January: “From two thousand and hudredths [sic], take one thousand and fore [sic] and four Millionths…” Alexander also divided fractions and studied the “Single Rule of Three,” a series of “three numbers given to find a fourth that’s…in the same proportion to the third as the second is to the first.” 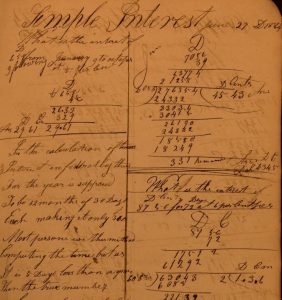 During the spring and summer months, Alexander learned about how to apply mathematics to the world of finance in order to calculate simple and compound interest. He also learned how to solve problems using obscure techniques such as “fore and fret,” which were “allowances made in selling goods by weight,” or “single fellowship,” a concept where “different stocks are employed for a certain equal time.” On June 15, after completing his final lessons in single fellowship, Alexander wrote on the bottom of the page: “Done with single fellowship and I am glad of it for they are very troublesome indeed.”

The level of math that Alexander was learning seems complicated and advanced for a young teenager living in rural Pennsylvania back in the 1820s. The people of Pennsylvania, however, have a long legacy of valuing education that goes back to colonial days. William Penn first proposed a system of compulsory education in schools that would be funded by public money and managed by the government in the late-17th century [3]. Early German settlers founded parochial schools that were associated with a particular religious institution [4]. The Scotch Irish also encouraged scholarly endeavours, and like the German settlers, formed schools around their church. Unlike the diverse denominational backgrounds of the Germans, however, the Scotch Irish overwhelmingly belonged to the state church of their homeland in Scotland, the Presbyterian Church. Presbyterians emphasized the need for an educated, well-read clergy, and believed that all children, both girls and boys, had to be literate in order to read and comprehend the scripture—a key tenet for salvation [5].

Alexander’s notebook does not state where he went to school. Before an extensive public school system was created in Pennsylvania in the 1830s , students learned at small, locally funded schools established in private homes, by churches, or in simple log cabins [6]. A log cabin that existed on land adjacent to the Fullertons in North Beaver Township operated as a schoolhouse as early as 1804 and may have been the location of Alexander’s education [7].

Alexander’s name was not the only one to appear in his ledger. His sisters Mary and Bathsheba signed the notebook on several pages. Other girls’ signatures appear in the notebook, like that of Margaret Adair and Ann Clark (the signature for Margaret Adair was followed by the words “my dear,” raising the possibility of a school romance). The presence of girls in the ledger may be evidence that girls attended the same local school that Alexander went to. While Alexander’s name is signed across the bottom or top of most pages, the signatures of his siblings James, Robert, and John Fullerton attempt to lay claim to some of the pages. There is the possibility that the paper and fountain pen were precious resources to be shared among the Fullerton family, and that all of the brothers attended the same class. Yet, Alexander was not willing to hand over possession easily, and writes on one page, “Alexander Sharp Fullerton’s book hand and pen. Steal it not for fear of the gallows.”

Alexander Fullerton remained in North Beaver Township for the rest of his life, farming on the land first settled by his father [8]. On June 28, 1836, Alexander married Jane Allsworth and started a family. By the 1850 U.S. Federal Census, Alexander Fullerton had five children: Margaret, John, William, Mary, and Isabelle. All four of the youngest children were listed as having “attended school within the year,” following in their father’s footsteps [9]. In the 1870 Census, seven years before his death, Alexander was still listed as a farmer with real estate valued at $4,200. His wife Martha was occupied with “keeping house” and his 27 year old daughter Mary was still living at home [10]. Alexander was described by his descendants as a “kindly, genial man who loved children.” He had a penchant for maple syrup, and made eggshell sweets filled with syrup for visiting grandchildren. Alexander’s son, John M. Fullerton, served with the Mount Jackson Battery B in the Civil War and survived all twenty seven battles that the company fought in [11]. Alexander Fullerton died at his farm on February 3, 1877 [12].

To view the ledger, CLICK ON THIS LINK: https://drive.google.com/drive/u/1/folders/0By4dH03IZ7VseFdMTWRKVWxWTDQ