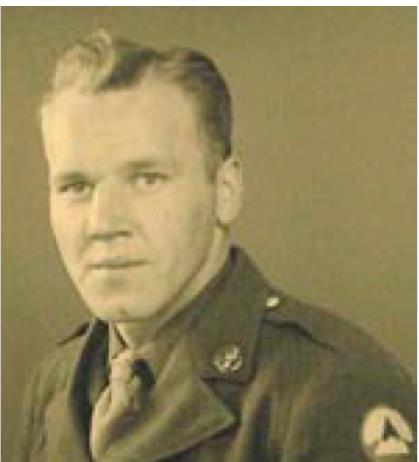 Ed’s Note: on July 28, 2018, we added a 2-part YouTube video recounting this remarkable discovery  (scan to bottom of this post)

We all have our own stories regarding loved ones who served this country and whom we honor on Memorial Day. The following account was written by Lawrence County Historical Society volunteer Betty DiRisio. It is her story of a loved one in her family.

My uncle, Hugh R. McCormick, lived on the Old Butler Road (New Castle, PA). He was killed during WWII in the Netherlands. It was toward the end of the war and he had already survived most of the war including the Battle of the Bulge. He was on a reconnaissance mission crossing the Maas River with a few others in a small boat. The Germans opened fire and Hugh was shot in the stomach. He died in his buddy’s arms before their boat capsized and he was swept away by the swift waters of the river. He was reported as Killed in Action in 1945. His parents passed away without every knowing the facts surrounding their son’s fate. Hugh’s remains were not recovered until 1969 when a Dutch woman found them in a dry river bed. He was returned home in 1970 for his burial, 25 years after his death. In 2005, another 25 years passed, after all of his siblings had passed, our family was again contacted about someone inquiring about our uncle, this time from someone in the Netherlands.

We soon learned that a public broadcasting/Catholic channel in Holland (KRO) has a program that translates in English to “Miracles Exist”. The station had received a letter from the Dutch woman who found Hugh and shared with them her miracle. The station decided to run the story about the events surrounding the finding and identification of Hugh’s remains. In response to the station’s request, we sent them photos and the newspaper clippings from the time he was reported Killed In Action in 1945 to 1970 with all of the news articles that appeared when he was found.

After speaking with reporter numerous times, she asked if I could come to Holland the following week to appear on this program and to meet the woman who found the remains. Two of Hugh’s other nieces joined me.

We were taken to Southern Holland to the Netherlands American Cemetery and Memorial at Margraten. There are 8,301 American Soldiers entered here. There is also a “Court of Honor” that contains the “Tablets of the Missing” on which are recorded the names of 1,723 American Missing who gave their lives in the service of their country and who rest in unknown graves.

(Prior to these events, it was unknown to us that Hugh’s name appears on this wall.) At the wall in front of Hugh’s inscription, the Dutch woman, Johanna Stoel was filmed placing flowers at the wall. She was 83 years old, and suffered from a number of serious ailments. A former Catholic nun and school teacher, she was fluent in 5 languages. She contracted TB years ago and had to leave her convent. From her efforts we would soon learn more about the events that surrounded Hugh’s return to the US.

In July 1969 two boys were fishing on the Maas River near Lomm and found what they thought was a ball in the mud on the river bed. (The water level had been lowered to allow for inspection of the flood gates on the river bottom.) They dug up the “ball” only to find it to be a human skull. They ran to their teacher, Ms. Stoel, who lived nearby. She had previous involvement in archeological digs for war remains and the boys knew she would be able to help. She, the boys, the authorities and a German Archeological team searching the area on another dig, continued to search for a week for additional remains. They found additional bones, a boot with bones in it, and a sheath or holster that carried gun cleaning supplies. With this information, they were only able to identify the remains as an American. They also found a religious artifact, a small cross. Ms. Stoel was very upset that they could not find any dog tags to identify who it was they had found. She knew that if they did not find something to identify him he would not be returned to his family. She prayed that she be allowed to find the tags. After the authorities gave up the search, she continued. After a week of independent searching she learned that the water authority was going to reflood the river bed. She went to the river. It was raining and the river bed was filling up. She was angry with God for not allowing her to find the tags and asked him WHY? Why would you lead me here and not allow me to find the tags? Just then she said it quit raining, the sun came out and she saw a bright flash. She reached down into the water and pulled out the dog tags with the name “McCormick, Hugh R”. Her prayers had been answered. This was her miracle. She gave this soldier an identity. He would be returned to his family with a proper burial. She tried to reach the family back in 1969 but the Army was unable to give out the information because of privacy concerns. She relayed this information to the station. They surprised Ms. Stoel with our presence at the Memorial Wall. She was overwhelmed! We presented her with a handkerchief that Hugh had sent to his sister when he was stationed in Iceland, together with numerous photos of Hugh as a baby, a child, an adolescent and a soldier. She had always wondered what he looked like—one of her liberators. The KRO recreated the dig for the program that aired in Holland July 31, 2005. The program was also distributed throughout the schools in Holland as an educational piece to reinforce the importance of the need to continue the search and identification of the war dead.

This trip was such an amazing experience. We walked through a farm and cow pasture to get to the river and to the spot where Hugh was found. We were on what was once German occupied territory. This very flat land with few trees, left nowhere to hide or seek cover. The river banks were not high. We could imagine the boat carrying Hugh and his fellow soldiers across the Maas River where the Germans opened fire killing Hugh. We knew that Hugh’s parents and siblings would have wanted to stand where we stood; to hear what we heard. We imagined their grief at the loss of a child and a brother. We cried for them. We visited the Ann Frank House in Amsterdam and again heard her story, in her house of hiding, and could only imagine her experiences and those of millions like her. While at the Memorial, a man came up to me, apologizing for his broken English, and asked if I were a relative of Hugh McCormick’s. (He had heard about the program) I told him “yes”, and with tears running down his face he thanked me. He said if it were not for Hugh and those like him, he would not be alive today; that he and his family owe us a great deal of gratitude for the sacrifices made by our loved ones who died so that he and his family could live. We both cried and embraced. He visits the Memorial 3 to 4 times a year to pay his respect and to give thanks. Thousands of our soldiers were unable to be sent home from Holland. But thousands of Dutch families adopt these soldiers and scrub the crosses on their graves keeping them bright white. To experience first-hand the gratitude for the sacrifices of our soldiers was so remarkable and so very emotional. What was once only a story in a history book became so much more that day. The soldiers’ sense of duty, of honor and of self-sacrifice overwhelmed me. I felt the gratitude of a country expressed in a few broken words of English, the tears of a stranger and thousands of white crosses glistening in the sun.

We all owe such gratitude to our men and women in uniform, past and present. For their bravery and sacrifices we continue to enjoy Freedom. They risk so much for the good of so many.