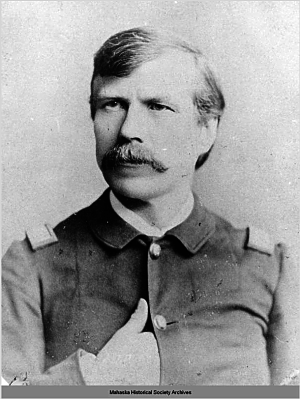 We hear Civil War stories about the men from Battery B, and those from the Roundheads of Lawrence County. But here is another story of a Lawrence County native who served in an Iowa infantry.

Major Samuel Hawkins Marshall Byers was born in Pulaski on July 23, 1838 to James M. Byers (1814-1898) and Permelia E. H. Marshall (1818-1838). Born in Pennsylvania, lived in Iowa and died in California, “Marsh” symbolized the Westward Expansion of the country. Byers left Lawrence County when he was about 12 joining the tide of immigrants who sought fortunes in the Midwest. His family settled at Oskaloosa, Iowa where he lived for many years. He studied law, but when the Civil War broke out he joined the 5th Iowa Infantry. Wounded at Champion Hills, Tennessee, he was captured by the Confederates at Chattanooga. He was imprisoned in several southern prisons including Richmond’s notorious Libby Prison.

While captive Byers learned of Sherman’s campaign and wrote the poem “Sherman’s March to the Sea.” It was set to music in prison in November 1864. A fellow prisoner, upon his exchange, carried a copy of the song concealed in his wooden leg out of the prison. The song became very popular and Byers became well known as its author. Byers escaped from prison just prior to Sherman’s arrival in Columbia, South Carolina in February 1865.

When Sherman came through, he learned that the author of the song was there. Sherman stopped his army’s victorious march long enough to greet Byers and invited him to dine with him. Byers was given a place on Sherman’s staff during the final days of Sherman’s campaign. The general would adopt “Sherman’s March to the Sea” as the title to his campaign. Byers was selected by General Sherman to carry the first news of Sherman’s victories to General U. S. Grant and President Lincoln.

After the war, Byers became a member of the Consular Service and was appointed to Zurich, Switzerland. His successes there caused his promotion to Consul General in Italy and later he was returned to Switzerland in the same capacity. He was a prolific writer authoring such works as “Iowa in War Times,” “The Happy Isles,” “Switzerland and the Swiss,” “With Fire and Sword,” “Twenty Years in Europe,” and “A Layman’s Life of Jesus.”

He married Margaret Gilmour of Pontiac, Michigan on June 14, 1869 in Galesburg, Illinois and they had a son and a daughter. Marsh died May 24, 1933 at the age of 95 in Los Angeles and is buried in Oskaloosa.

Sherman’s March to the Sea by Samuel H. M. Byers

OUR camp-fires shone bright on the mountains
That frowned on the river below,
While we stood by our guns in the morning
And eagerly watched for the foe,
When a rider came out of the darkness
That hung over the mountain and tree,
And shouted, “Boys, up and be ready!
For Sherman will march to the sea.”

Then cheer upon cheer for bold Sherman
Went up from each valley and glen,
And the bugles re-echoed the music
That came from the lips of the men;
For we knew that the stars in our banner
More bright in their splendor would be,
And that blessings from Northland would greet us
When Sherman marched down to the sea.

Then forward, boys, forward to battle,
We marched on our wearisome way,
We stormed the wild hills of Resaca;
God bless those who fell on that day!
Then Kenesaw, dark in its glory,
Frowned down on the flag of the free,
But the East and the West bore our standards,
And Sherman marched on to the sea.

Still onward we pressed, till our banners
Swept out from Atlanta’s grim walls,
And the blood of the patriot dampened
The soil where the traitor flag falls;
Yet we paused not to weep for the fallen,
Who slept by each river and tree;
We twined them a wreath of the laurel
As Sherman marched down to the sea.

Oh! proud was our army that morning,
That stood where the pine darkly towers,
When Sherman said: “Boys, you are weary;
This day fair Savannah is ours!”
Then sang we a song for our chieftain,
That echoed o’er river and lea,
And the stars in our banner shone brighter
When Sherman marched down to the sea.