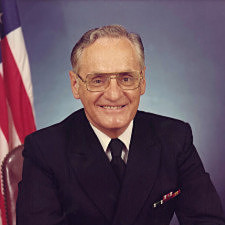 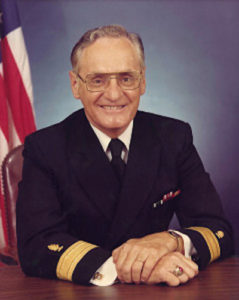 unty) Pennsylvania, on February 18, 1928. He was the youngest of 19 children born to Italian immigrants Tony and Mary Angelo. His father worked in the limestone quarries. Lewis grew up in a poor family. They moved to New Castle, Pennsylvania, in the early 1940s. “Red” played football for New Castle High as a guard, graduating from there in 1947.

Admiral Angelo received the Legion of Merit, Meritorious Service Medal with gold star, Navy Commendation Medal and the Good Conduct Medal with two bronze stars. He retired in 1987 as Director, Medical Service Corps, Office of the Chief of Naval Operations and Deputy, Director for Personnel, Naval Medical Command. He was awarded the Silver Medal Award by the American College of Healthcare Executives in recognition of his lifetime professional achievements as a healthcare executive. Beginning in the 1970’s, the Navy Medical Service Corps officers met annually in conjunction with the American College of Healthcare Executives Annual Congress on Administration. The symposium focused on providing current military healthcare information to Navy medical department officers. Upon his retirement and in recognition of his support, the Navy named the symposium the “Rear Admiral Lewis E. Angelo Professional Symposium” (LEAPS) as well as that of the award which it bestows every year.

He married Mary Alma Smith of Philadelphia. They had five children: Louis Eugene, Mary Ellen, Regina, Mark Anthony and Charles William. He died February 2, 2011 and is buried in Rockville, Maryland.