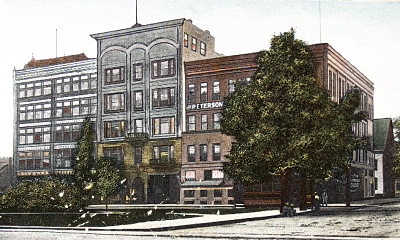 In the mid to late 1700’s our area was inhabited by the Lenape Indians (the Delaware) in a group of villages known as “Kushkushkies town”. Kushkushkie was divided into four towns, each at a distance from the others; and the whole consisted of about ninety houses, and two hundred able warriors. (Christian Frederick Post 1758)

The largest of these towns was located in what is now New Castle. The actual town was believed to have been located on the bank of the Shenango River opposite the opening to the Neshannock Creek. The Chief or “King” of the Delaware had his headquarters here. This Chief was called “Pack-an-ka” in the Delaware language but was referred to as “King Beaver” among the white settlers. 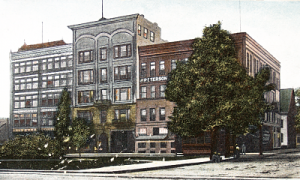 According to the Old Timers Association of New Castle, in 1939 the giant sycamore tree which stood on the southwest corner of North Jefferson and West Washington at the Diamond marked the spot where Packanka held council. Whether folk lore or fact, some of the earliest residents recalled that the primeval tree was standing when the first log cabin was erected here in the woodlands. Over the years scores of residents would take a respite under the shade of the tree on hot summer days. As the tree aged and became diseased, it was threatened with being felled, but it was saved by the community. In 1910 tree doctors were called in and found that part of the trunk was hollow. It was filled with cement and a pipe was inserted into the tree that had been connected to the water main in an effort to provide a fountain for the pubic use. The City finally determined that the weakened tree limbs were a hazard to the public and the historic giant sycamore was cut down about 1935. It is seen in this vintage post card.