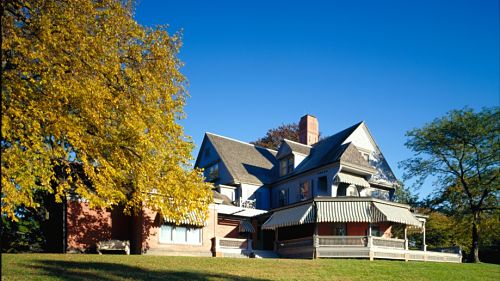 Join Us for a Free Lecture on Wednesday, November 14 at 7pm. Presentation by Amy Verone discussing Theodore Roosevelt’s public career and his family life in Oyster Bay, New York.

Amy Verone grew up in New Castle and graduated from Neshannock High School in 1974. She majored in History at Washington & Jefferson College and earned a Masters in American Studies from George Washington University. Verone worked at the National Archives and the Smithsonian Institution before joining the National Park Service in 1991.

Verone served as the Chief Curator at Sagamore Hill National Historic Site, the home of Theodore Roosevelt, for 24 years until retiring in 2014. Her presentation, “A Constant Pleasure,” covers Theodore Roosevelt’s public career and his family life in Oyster Bay, New York. She discusses his family life growing up, how he was raised, and how he ended up at Oyster Bay. He loved the area so much that when he married, he chose to live “in the wilds of Long Island.” He made it his “Summer White House,” coining that term “Summer White House.”

In 1909, after his presidency, Roosevelt went to Africa for a year, then returned to Sagamore Hill where he resided the rest of his life. He is buried nearby. His widow lived at Sagamore Hill for 29 years after his death.

FREE and OPEN to the PUBLIC