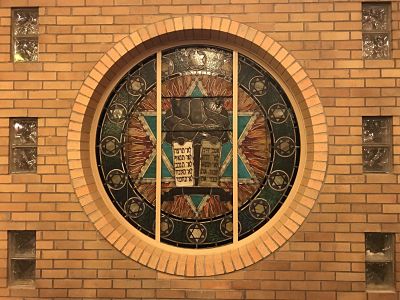 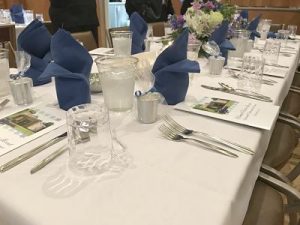 The hall was decorated with almost two hundred people, surrounded by nostalgia and somberness. The individuals were laughing about their childhoods and the individuals who they marked as great influencers on their lives. A tradition, a family, and a great community connected through generations of relatives and spirituality. They convened at a place in which the large community was held together in times of rough waters, times of great solitude, and times of solemness. But, why were they gathering and who are these people?

On Saturday, October 14, 2017, this dinner, in which over 200 people attended, marked the closure of the Temple Hadar Israel synagogue. This congregation, which was established in 1894 under the name Tifereth Israel Congregation, would later merge with Temple Israel in 1997. It was with this merged organization that the Temple Hadar Israel synagogue held their Farewell Congregation Dinner last week, which will mark the end of publicly practicing Judaism in Lawrence County proper for 123 years. The services will cease on December 31st, noting the end of the calendar year for a community. 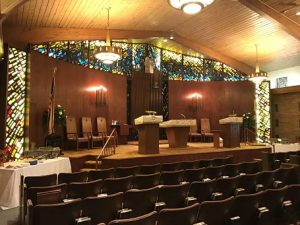 Following the completion of the canal in 1833, the first Jewish families began to appear within this area. The first noted meeting of the Jewish people was in the mid-1870s at the home of Max and Fannie Weinberg. Together, forty members broke ground to establish the Tifereth Israel synagogue in August 1894. Located on Home Street, this synagogue was Orthodox, pedagogically. Weinberg was named the first president. By 1901, the congregation had almost 140 members and was outgrowing the Home Street location. Tifereth Israel would later establish new synagogue on S. Jefferson Street.

Beginning in the 1900s, Reform Judaism was being practiced in New Castle. This group was assisted by the Rodef Shalom Congregation of Pittsburgh, under the direction of Rabbi Dr. J. Leonard Levy. It was under Rabbi Levy that the B’nai B’rith lodge was organized. Eventually, other Jewish institutions were forming around Lawrence County: the Zionist council, the National Council of Jewish Women, the Hebrew Free Loan Association, and a Hadassah chapter. It was under this Reform congregation that they formed Temple Israel in January 1926 and established their synagogue on the corner of Highland Avenue and Moody Street. The building was dedicated to Rabbi Levy.

A third contingency was established in 1925 in accordance with Conservative Judaism under the name Beth Shalom. This organization joined Temple Israel in 1928, but soon withdrew and dissolved in the 1930s.

Both the Tifereth Israel and Temple Israel quickly grew in membership. In the 1950s, the Tifereth Israel shifted its pedagogical methods to more Conservative Judaism, apart from its original Orthodox Judaism. It wasn’t until five years of conversations that the merger between the Conservative and Reform Jewish temples was made in 1997 to form the Temple Hadar Israel. 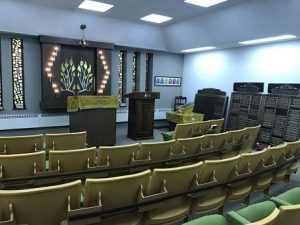 The evening of the dinner, the congregation of these combined synagogues, including the congregation from Ellwood City, came together to memorialize the 123-year longevity that Judaism played in Lawrence County. Welcomed by Jonathan Solomon, we were able to partake in a dinner commemorating the practice of this faith. Solomon began the presentation with a later-attributed letter noting the importance of freedom of religion and the practice of faith in the 1790s, written by President George Washington to the Congregation of the Touro Synagogue in Newport, Rhode Island.

Solomon would later introduce the President of the Temple, Sam Bernstine, by noting, “Sam is probably the best, most resourceful and conscientious holder of this office in our history… [He] has led us with dignity and pride.” Bernstine introduced Rabbi Howard Stein and made note that it was through the rabbi that the congregation was able to devote energy to G-d and the holy texts. The rabbi blessed the food and recited the Havdalah, which consisted of lighting two woven candles, blessing a cup of wine, and smelling sweet spices. This celebratory event was extensively organized and chaired by Carole Schwartz-Cohen, Marcia Myers, and Miki Myers. It was with the support of the congregation that this came to fruition. 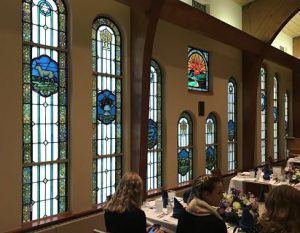 Following dinner, Solomon addressed the greatness of the freedom of religion and the stewardship President Washington expressed towards the Jewish people. He noted that “the two Jewish houses of worship in New Castle and one in Ellwood City served as emblems of Washington’s pledge to stand in the face of our local bigots: the Ku Klux Klan in the 1920s, the Silver Shirters and America Firsters in the late 1930s and early ‘40s, the Lindberg lovers and Coughlin-ites of the same period, the John Birchers of the 1950s, and the ARAMCO propaganda for the House of Saud and Gamel Nasser that we were fed in Our Weekly Readers. Our physical presence out in the open–on Reynolds Street, on Highland Ave, at Moody and Logan and in Ellwood City was a reminder to those majoritarians that Lawrence County, Pennsylvania is not just a WASP homeland, but that Jews, the Irish, the Italians, the Hunkies, the Syrians and Lebanese, may indeed apply.”

It was after the dinner that the Rabbi Stein offered his remarks and gave a menorah to Art Epstein for all of his guidance and to Sam Bernstine a mezuzah for his constant dedication to the congregation and Judaism. Following the remarks, Janice Coppola and Nanette Solomon played a clarinet and piano duet. The Rabbi then blessed the meal by reciting the Birkat Hamazon.

As we were walking out of the Temple Hadar Israel’s Farewell Congregation Dinner, I saw the Levines, the Waldmans, Mrs. Edman, and many others take in the generations of love and labor that this community provided to them through their ties. As we were walking out, the memorial plaques were being removed and given to the relatives and descendants by Sybil Epstein. Yahrzeit walls, as they were known, which memorialized the loved ones and were lit up each year marking the date of their death in both the standard and Hebrew calendars as well as their English and Hebrew names. 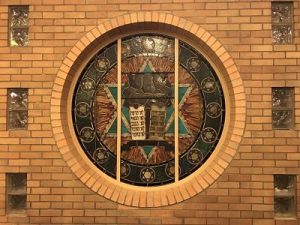 And so, this year marks the end of publicly practicing Judaism in Lawrence County; however, the recognition of the Jewish heritage will always be evident in Lawrence County–marking the South Side, the North Hill, Ellwood City, the many shops, albeit jewelry to meat packing, and dentistry to law, the Jewish culture finds its layer in Lawrence County’s history and whose narrative will be preserved therein.

“Within Jewish culture, the stones lain at grave sites symbolize the permanence of memory and mark the visitation of an individual at the site. As covered in the article attached, Rabbi Wolpe states, “There is something suiting the antiquity and solidity of Judaism in the symbol of a stone. In moments when we are faced with the fragility of life, Judaism reminds us that there is permanence amidst the pain. While other things fade, stones and souls endure.”

For more information on the cultural meaning of placing stones on graves, visit https://www.myjewishlearning.com/article/putting-stones-on-jewish-graves/