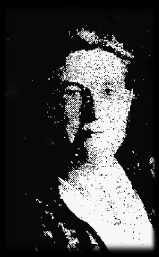 Before women were given the right to vote in Pennsylvania, New Castle had appointed it’s first woman police officer. In March 1920, a new ordinance created the position of a police matron who would have charge of all female prisoners and the authority to interrogate and arrest women for violations of the law. Such laws included violations of the new “street walker” ordinance. While the position came with reasonable pay, Mrs. Rae Muirhead, a widow, offered her services free of charge.

As Police Matron, all women and girls that fell under the direction of the New Castle Police Department were under her charge. Mrs. Muirhead served in the position from March 1920 until September 1923. She appeared before parole boards and her opinions and recommendations were well received and respected by state officials. Governor Pinchot appointed her as a member of the Board of Trustees of the Western Penitentiary, a position she held for about 18 months before she fell ill. In 1921, New Castle banned “cheek to cheek” dancing and shimmying. As part of her official duties, Muirhead would spring surprise visits on city dance halls, enforcing the order.

From Bibles to the Law

Mrs. Muirhead was born in Chatham, New Brunswick, Canada, September 19, 1872. She appears to have relocated to New Castle in late 1910 or 1911. Prior to that time, Greenville, Illinois was her home.

Mrs. Muirhead first came to New Castle in 1910 while traveling with the Billy Sunday Evangelical group. She had been with the group for about two years. Brought up in a strict Scotch Presbyterian home, she was well versed in the teachings of the Bible. She ministered to our women and girls, as Billy Sunday did to our men. At a time when women were not given the same rights as men, she fought for the rights of women to be allowed seating in the Billy Sunday Revival Tabernacle. She organized meetings among the working girls and women of our factories sometimes using the facilities at the YWCA. Muirhead set up women’s organizations throughout the area known as the Rea Muirhead Business Women’s Group. Functioning much like a lodge, these groups would hold Bible class meetings and social gatherings to promote friendships. While in New Castle, she continued her Evangelical activities working with Dr. Charles J. Jordan of Volant who was holding revivals as late as 1915.

Rae Muirhead was a former member of the New York City Police Department and of the Chicago force in the suppression of “white slave” traffic. She died at her home in New Wilmington, Pennsylvania, on May 31, 1925.