We Can Do It! WWII – Traveling Exhibit

An event every week that begins at 11:00 am on Tuesday, Thursday and Saturday, repeating until May 21, 2019 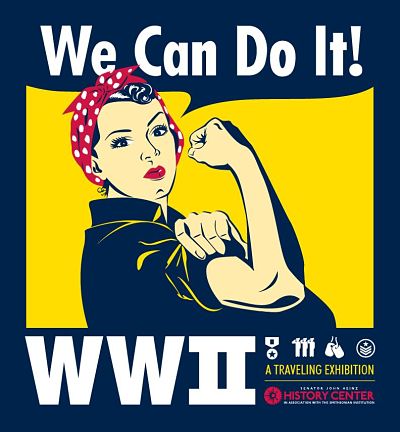 Come visit the NEW “We Can Do It! WWII” traveling exhibit which explores Western Pennsylvania’s incredible impact on the home, industrial, and battle fronts during World War II. Beginning March 30 through May 21 every Tuesday, Thursday and Saturday from 11 am to 4 pm. 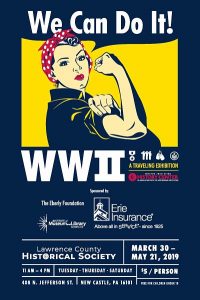 As an added benefit, we will be offering lectures during the exhibit. Visitors to the exhibit will learn about the development of the jeep, a uniquely American invention produced by the American Bantam Car Company in Butler, Pennsylvania, and hear the stories behind Rosie the Riveter and the local Tuskegee Airmen whose contributions helped to turn the tide of the war.

Entry fee = $5.00 per person (includes access for the entirety of the exhibit’s duration). FREE for children/youth under the age of 18.

The “We Can Do It! WWII” traveling exhibition is scheduled to visit 18 cultural institutions throughout Western Pennsylvania over the next three years.